"See what YOU made me do!" The 'games' we play in the office 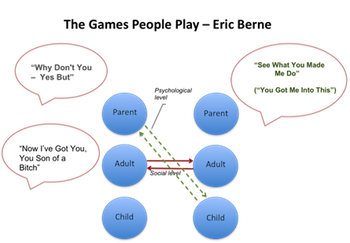 By making a coachee aware that they are part of a 'game' then this empowers them to step away from an unhelpful or destructive interaction. It is then the skill of the coach to help the coachee develop new and more empowering ways to manage the relationship.

Here are three of the most common 'games' played out in the office:
(Remember from our previous blog that on a ‘social level’ an adult-to-adult discussion seems to be occurring but on a ‘psychological’ level – one that is unconscious to the those involved – a parent-to-child transaction is being acted out.)

The game goes on until finally P1 runs out of ideas and there’s silence. P2 will reject all solutions. The basis of the game is that no suggestion is ever accepted, and the PARENT (P1) is never successful.

For P2, the eventual silence from P1 brings its own little pleasure – it is really saying it’s you (P1/ THE PARENT) who is inadequate for you cannot find solutions for me (P2/ THE CHILD).

Person 1 (P1) is feeling unsociable and becomes engrossed in an activity that will insulate him against other people. An intruder, a work colleague (P2) for instance, interrupts him while P1 is writing a report at this computer.

The interruption causes P1 to hit a wrong key on his computer and he loses his work.

This gets repeated over the years until eventually people leave P1 alone when he’s engrossed. Of course, it’s not the intruder but P1’s own inability to control his emotions and temper that causes him to make a mistake.

(This game can soon become a way of life, rather than merely used as an occasion self-defence mechanism. For instance, P1 might deferentially go along with the team’s decision is an effort not to micro-manage, and if things turn out well P1 can take the praise and say ‘See what a wonderful manager I am because of the freedom I give my team’. But when things turn out badly then P1 blames others with a new game: ‘Look What You Got Me Into!”. It’s a double-combination that’s played out not only at work but in many marriages.)

This is played out by someone who enjoys the discomfort of others.

Berne uses the example of a poker game, in which one P1 gets an unbeatable hand but he’s more interested in the fact P2 is at his mercy than he is in playing poker.

P1 gives a team member (P2) an expenses allowance to stay in a hotel after a business meeting. P2 submits his invoice with some money added on for extra drinks and a meal. P1 becomes incensed – and is indeed delighted to have caught someone out – and calls P2 in to his office to demand an explanation, and starts to question P2’s integrity and ethics until eventually P2 pays for the extra expenses himself.

Both are playing games – the P2 by submitting the bill knowing he’s overcharged, P1 by venting rage. Instead of negotiating in an adult way, perhaps showing a little innocent annoyance, P1 criticises team member’s character.

A parent-child dialogue is occurring beneath the surface.  Indeed, P1 might look back over the years at many cases where he’d been provoked and relished the opportunity to punish the injustice, and remembered less the original provocation but more the details of the ensuing battle.

How to develop new tactics and avoid these games

As previously, helping coachee’s realise that they’re involved in a ‘game’ is an important first step and it takes some skill in identifying the games. The real skill, however, comes in finding new ways to empower the coachee with new way to deal with future situations. This is where quality coaching can really come into play.