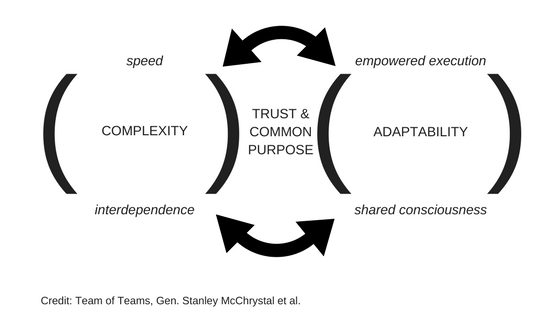 A coachee of mine recently recommended a book, Team of Teams by General Stanley McChrystal. The author describes various organisations’ responses to succeeding in a VUCA environment. The solution was to create organisations that combined a web of responsive, interconnected teams that worked with extreme transparency and decentralised decision-making authority.

McChrystal’s recommendations tie in with several of Lequin’s experiences running change programmes, which are discussed below.

The solution: a ‘team of teams’

How to break silos & join teams up - introduce ‘systems thinking’

From hyper efficiency to transparency and adaptability

What key principles are required to develop an adaptable culture like the team of teams, and for a successful change programme?

To build this adaptable, team of teams, from Lequin’s experience and from our research, you need to adhere by 7 principles:

In the change programmes Lequin have run, we’ve worked with leaders and managers to identify the non-negotiables behaviours, the highly influential individuals and groups, and the stories that are to be told. And we’ve then worked to train and coach leaders, managers, change champions and the highly infleuntials to support the organisation to drive the change.

A key part of the programmes Lequin run is the use of systems coaching to get leaders, managers and teams thinking about the organisation as an organic system, and about the impact that often unseen, subconcious behaviours and processes send out as both negative and positive ripples throughout a business.

Read a case study of a recent programme for George.

Source: Team of Teams, New Rules of Engagement for a Complex World